I started thinking yesterday about making more templates for some new pieces, new forms. So I pulled out the posters, and proceeded to come up with things I thought might work. 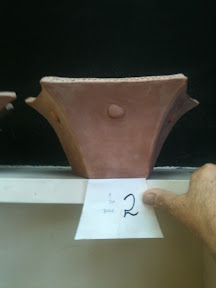 Like putting a base on this form to make it more like a punch bowl or centerpiece for the table.
I finished cutting out several forms 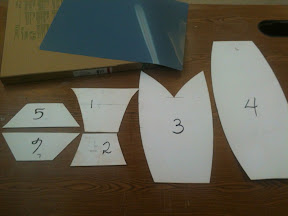 when a neighbor came by with a box of undeveloped X-ray film! He said I could have their whole remaining stock of undeveloped film from the hospital if I want, as they have gone completely digital with their imaging. What a find! I can cut out stencils, OR templates!
I have decided to number the templates to keep track of which one works with the others. For instance, I originally cut the #5 template as a base for the punch bowl idea, but the angles are too sharp, and it won't stand up by itself. So I cut #2 instead.(which works much better). Numbers 5 & 6 will work great with 4 sides, but not with 5 sides. Etc., etc., etc.
Have a good day!
- Posted using BlogPress from my iPhone