Having watched the video of Shoji Hamada making a tea set in under 4 minutes, about 20 times, and marveling that someone could do that so fast, I decided to try.
I didn't get it done in 4 minutes, but did finish throwing and assembling in one hour.  I have spent another 30 minutes or so cleaning it up, smoothing it out, cutting the foot, and putting a handle on the teacup. The only thing I have left to do is do a little carving on the handle of the teapot, so it isn't just a bulky, thick, cylinder sticking out of the side of the pot.
Next, I have been trying to decide on the glaze, and have settled (I think) on an Almond Spice interior, and a Mint Irish Creme on the outside... maybe drizzle a little Almond Spice along the top lip to flow down like foam - at least that's the thought process.  We all know how often the glaze turns out exactly like we imagine it in our mind's eye.  I'll post pics in a week or two when it's finished and glazed! 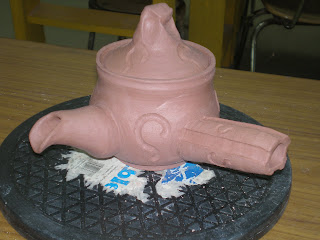 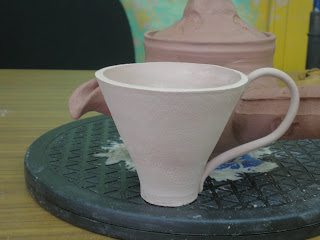