These were my last three pieces for last semester, but not the year. The glare of the tropical sun was so bad I had to place them in the shade to get these photos. But I like the effect of the natural surroundings, it helps bring out the glaze colors. This pot has a nice almond spice inside, and three blues on the outside. The lip is mint Irish creme, the first band a nice floating blue, the center band was a semi-matte light blue that almost went clear, and the bottom is an Oribe Green that went mostly blue. 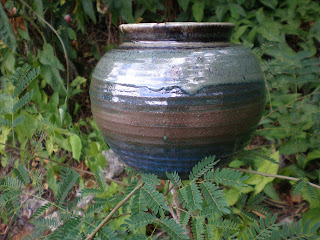 I wanted to try a new shape with this one (thanks Mary, your pieces inspired this one). I also wanted to try our new Licorice glaze... and it is definitely a cone 6 or 7. At cone 5, it leaves a lot of gold looking specks throughout the glaze, almost giving the piece a yellow look. I dipped the blue first and overlapped the licorice. The blue is also a cone 6 or 7. At cone 5 it doesn't fully develop the full blue color. Having said all that, I think it turned out rather nice. 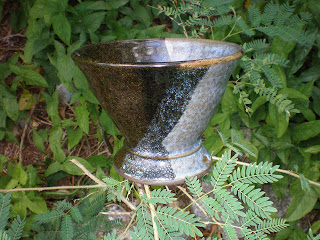 This one was experimental.  I used a Conrad Black stain on the top band (outside) and the bottom and feet.  Then I filled the inside with an Oribe, painting it on the outside with the same Oribe.  To finish it off, after the first glaze firing (cone 5), I fired it again with a very nice clear to cone 6.  The second firing gave it some very nice runs and color changes.  The feet turned out especially nice on this bowl. 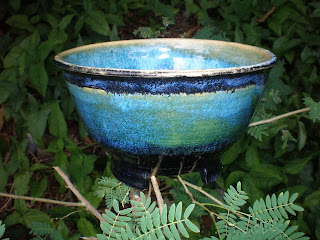