Linda Starr made a comment about my clay cutter the other day, and I realized that it is not a typical tool.  It came into being through a conversation I had one day with another potter here.
This guy has forgotten more about ceramics than most of the other potters in this area of the pacific.  He has audited classes at the University of Guam at least one semester a year since the late 1970's, outlasting 4 or 5 ceramics professors.
He and I spent most of the semester making, recycling, and mixing clay into 33 gal. trash containers.  During the semester, the other students were doing all their different projects with the newly mixed clay, but were struggling to get the clay out of the containers.  We discussed different ways of cutting it out, but couldn't seem to come up with something workable.
This guy is a real researcher though, and came up with a historical answer to our problem.  When they were building the tunnels in New York, the project ground almost to a halt when they hit a very sticky clay.  One of the workers came up with an idea that he had heard or read about how the clayworkers in ancient times dug their clay.  So he designed a handheld cutter for the workers to use in the tunnels.  This cutter worked so well that they were able to work much faster than with shovels.  Kind of like using a big cheese cutter...
What you see here: 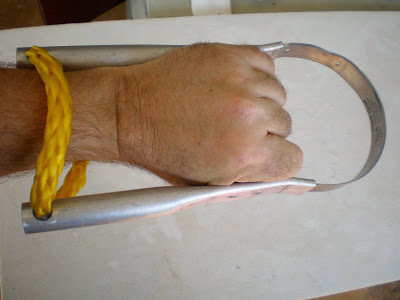 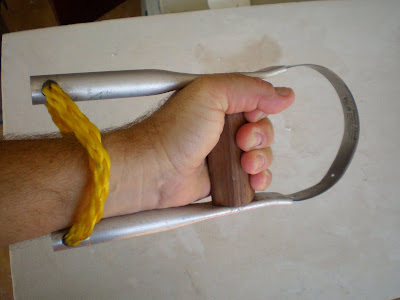 was simple enough to make.  The blade is a stainless bread knife with the serrated edge ground off.  The aluminum conduit is flattened out partially, smeared with JBWeld inside, the cutter is inserted and the conduit flattened out the rest of the way.  That cutter blade is then held in place by the two screws on both sides, that hold the wood handle in place.  Just as a note:  this was an early model, so it has a bare rope at the forearm to brace the cutter.  Later models have a garden hose or thick SMOOTH plastic hose over the rope.  The bare rope leaves rope marks on the forearm for a couple of days... slight bruising.  Makes everyone think you were mugged and tied up.
To make it easier for the shorter students to get all the way to the bottom of the containers, my friend attached a cutter loop like this on the end of a 2"X2" oak board, about 3 ft. long.  He sanded down the wood and used Thompson's water seal on it before attaching the cutter.
Hope this will help others who might be having the same problem with removing clay from large containers.  It's much more efficient than digging it out with your fingers!
Happy Mudding!
Posted by Mr. Young at 10:15 AM